Churches have been considered places of sanctuary for millions of people since the Christian faith inspired their construction. On Tuesdays and Wednesdays throughout the school year, our Performing Arts Center and occasionally our gymnasiums become places of sanctuary from the rush of the school year as students gather to learn more about God. Last week, the Upper, Middle, and Lower Schools all held their first chapel meetings of the year.

Stop by Lower School chapel and you’ll hear hundreds of voices joined to sing songs of praise, and watch as students eagerly raise their hands to answer questions. Head of the Lower School Sarah Love leads the monthly meetings, selecting a theme for the year and carefully reinforcing each lesson throughout the year. At last week’s first chapel, Love announced that the new year’s theme would be “Soaring in God’s Power.” Students were excited to learn more about allowing God to carry them through times of challenge and times of peace.

The Upper and Middle Schools join together for several chapels each year, and the first chapel is one of those meetings. Last Tuesday, a band of five students led the packed auditorium through several songs as a beautiful light show radiated down on them. Our Upper School chaplain, Dr. John Hugh Tate, then brought three students to the chapel stage to share about being baptized in the Jordan River alongside people from Zambia and Germany during the Upper School summer trip to Israel. The moment was, “…a profound representation of the body of Christ, of all believers around the world,” said Tate.

Throughout the year, each chapel service offered on campus will be prayerfully considered and thoughtfully presented to inspire students to continue to develop personal relationships with God and with friends and mentors. From difficult questions of theology, to painful experiences of life in an imperfect world, the JA chapel creates a space of sanctuary for students to grow and rest in the Gospel. 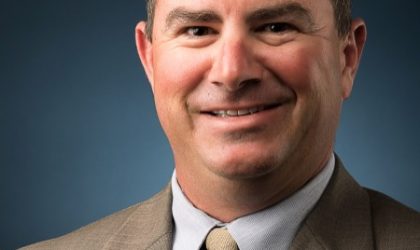 Fifty young baseball hopefuls eagerly took turns at the plate at Jackson Academy's Raider Park. The second through seventh graders were part of a program called Hitting with the Raiders that newly-named Varsity Head Baseball Coach Parker Harris and his coaching staff instituted this year. The hitting camp gave the boys an opportunity to hone their budding skills and to experience America’s sport with their friends. For Coach Harris, the camp was largely about building relationships, a key part of his philosophy of coaching. He is eager to share his love of the game with students.   Harris was named JA’s head baseball coach at the close of the 2018-19 school year. His goals include growing the program, connecting with students in lower grades who have an interest in baseball, teaching life skills that are mirrored in the game of baseball, and of course, competitively pursuing state championships.   Harris has been coaching since 2000 and has experience at a number of MAIS-member schools. He has coached in three sports and taught history, accounting, and computer. He holds a bachelor of business administration degree from Mississippi State University.    Originally recruited by Athletic Director David Sykes, Harris has been at JA since the 2009-10 season serving as assistant baseball coach. “JA has always been one of the top schools in the MAIS. As a young coach, you want to get to the Jackson area. To me, the ultimate goal as a coach is to be at a school like JA,” 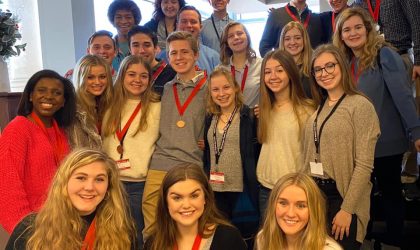 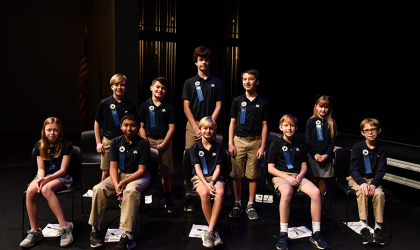 Ten students, each already a winner in their grade, stepped onto the PAC stage last Friday to compete in the final round of JA's National Geographic Geography Bee. The students represented grades four through eight and bravely answered questions about national and global geography, culture, landforms, and science before an audience of peers and family members. After 45 minutes, seventh grader Rob Penick earned first place, sixth grade student Yates Elfert claimed second place, and eighth grader Bo Barbour earned third place. Schools in all fifty United States of America participate in the annual geography tournament. The competition has three levels; school, state, and national. As the school’s winner, Rob will take an online test to determine whether he proceeds in the competition or not. If his score is among the top 100 in Mississippi, he will be invited to compete at the state tournament in March. Everyone who participates in the National Geographic Geography Bee earns something invaluable. The study materials and questions increase students’ knowledge of the world around them and highlight global issues such as deforestation, water scarcity, and wildlife conservation. The National Geographic Geography Bee inspires today’s students to become tomorrow’s explorers, scientists, and innovators by opening students’ minds to the diversity and delicacy of life on the blue planet.