Jackson Academy students attended the Mississippi Theatre Statewide Festival this past weekend. A number of JA students who were named as individual event finalists competed on Saturday.

During the awards ceremony on Sunday, Henley Nance earned first place and Gretchen Morris earned third place in the Musical Female category. Henley performed “Nothing” from A Chorus Line, and Gretchen performed “So Big, So Small” from Dear Evan Hansen. 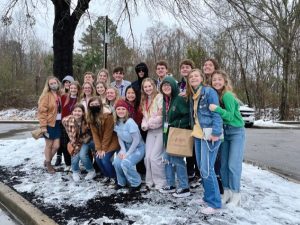 While at the festival, students also participated in workshops and college auditions and observed one-acts, Theatre for Youth short plays, and community theatre plays.