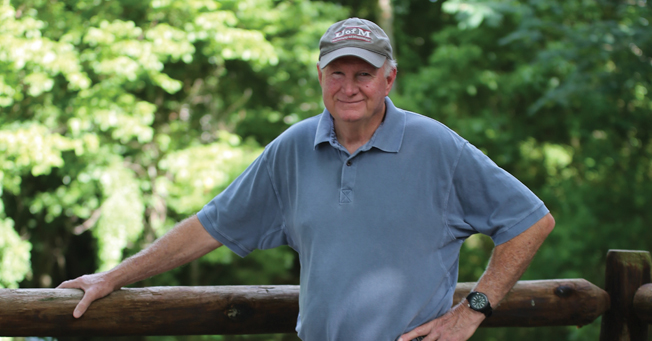 As Ray Higgins floated down the Chattooga River last summer, he did so with mixed emotions. After 40 years at Jackson Academy, this would be his last “official” year leading the annual rafting adventure. What started as a van full of adventurous middle school students had grown to be the hallmark experience for JA seventh graders. The challenge and thrill of the rapids remained, yet the moment was bittersweet.

“I recall telling Ray I only had one requirement, and that was that I be allowed to go with him.” ~Bruce Sumrall

The Start of a Tradition

In the early 1970s, Higgins had recently graduated from Ole Miss. The Memphis native was working as a youth director at a Jackson church when he spotted an opening at JA. Thankfully for JA, he got the job. Taking part in Young Life while in school and summers at a Christian camp had shaped the young history teacher’s outlook on how fun and community could lead to greater understanding of self and spirituality.

“As a teacher and coach, I wanted to incorporate that at JA,” Higgins said. “So I just started the trips. I loaded up a van and asked kids, ‘Who wants to go?” The first summer, he took two trips—one for girls and one for boys. Soon after, fathers started joining in, driving a second or third car. The trips grew from 30 to 60 to more than 80 students and chaperones typical of today. Upper school students now join the fun as mentors. Higgins organically grew the seeds of an idea into the can’t-miss opportunity of Middle School—one that alums remark on today as seminal to their time at JA.

“Outside of a church setting, Ray Higgins expertly demonstrates through the high-energy setting, devotionals, and quiet time that living the Christian life is an adventure!” ~Suzanne Guild

“The kids start a little uncomfortable with it all and then you watch them get comfortable,” said Higgins. “They find they need help to get through things like hiking down a canyon or shooting Class V rapids. It’s fun stuff, but it’s challenging stuff.” As part of every trip, Higgins also shares devotionals and the stories of the Gospel. The older students talk about their faith and spirituality with the younger students. “They’re not perfect at it. I’m not perfect at it,” he said. “But we’re all getting out into God’s creation.”

“The third person from JA I met was Ray Higgins,” said teacher Bruce Sumrall, who joined JA in 1977. “In his inimitable style, a combination of gentleness, conviction, and persuasion, he told me of his programs and, because at the time I was the Middle School dean and assistant headmaster, he asked for my permission to continue. I recall telling Ray I only had one requirement, and that was that I be allowed to go with him.” 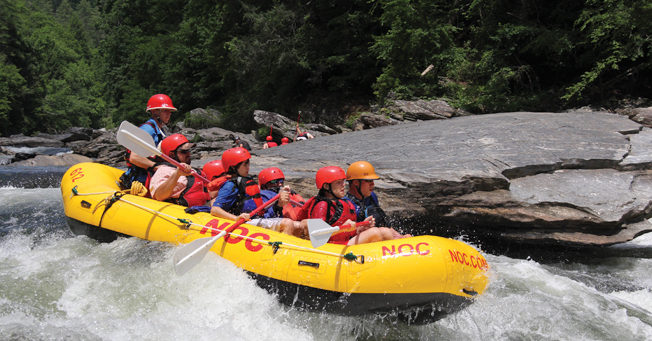 “More than experiencing the high adventure of these trips, there is an underlining component that has eternal impact,” said Suzanne Guild ’92, who traveled with Higgins as a middle school student, student chaperone, and again this year as a parent chaperone. Outside of a church setting, Ray Higgins expertly demonstrates through the high-energy setting, devotionals, and quiet time that living the Christian life is an adventure!”

JA is exploring ways to expand similar opportunities for students and families to step away from the classroom and hubbub of daily life, examine their relationships with each other and with God, and reflect on what it means to live a purpose-driven life.

“When you spend a week together as a group sitting around a campfire at night, jumping off 200-foot-tall rock ledges into a river, swimming beneath a 100-foot waterfall, and breaking bread together over meals, meaningful bonds are created that last long after the trip has ended.” ~Gregory Johnston

“The kids haven’t changed at all in my time doing this,” Higgins said. “They are still live wires. Other things have changed. The culture has changed. Some of them might be trying to grow up a little earlier. But they’re still kids. They’re still 12 years old. They are looking to be accepted. They fake their way through things. They think they’re invincible. But they’re not.”

Higgins’ work has won him legions of fans from Jackson to Nantahala. On last summer’s trip, the Nantahala rafting outfitter presented him with an honorary paddle and a cake. Fathers on the trip—some of them JA alums who had rafted with Higgins as students and have returned as chaperones—contributed a plaque to commemorate his dedication. “Throughout the trip I contemplated just how many lives that Coach Higgins had touched over those many years,” said alum and father Gregory Johnston ’91. “When you spend a week together as a group sitting around a campfire at night, jumping off 200-foot-tall rock ledges into a river, swimming beneath a 100-foot waterfall and breaking bread together over meals, meaningful bonds are created that last long after the trip has ended.”

As JA middle school students become upper school students and graduates, they take pieces of Ray Higgins with them. On a recent Outdoors Club trip to Montana and Canada, Bruce Sumrall discussed future plans with nine students—all seasoned Ray Higgins veterans—gathered around the campfire. “They planned to travel that summer to every continent except Antarctica. Because of Ray and his leadership, part of Ray and part of JA would travel with them.”

In addition to having more time to spend with his wife Millie (a JA pre-school teacher) as well as frequent trips to Oxford to visit his two children at Ole Miss (while perhaps taking in a game or two), Higgins will continue to share his wisdom and expertise as a consultant to JA. Families can expect to see him on future trips—just not every one. “I’m really more of a kayak-on-a-lake kind of guy, but I will always go to the Chattooga River. It’s by far my favorite. I just won’t have 80 people with me.”

Here’s What to Expect

Planning on joining a future rafting trip as a chaperone? First off, some important advice from Ray: “When you take thousands of kids over 40 years, there’s ample opportunity for things to go wrong. I’ve learned to be flexible. But before every rapid I still have butterflies. So I go back to one of my favorite verses: ‘If God is for you, who can be against you?’”

Day 1:  Head out from Jackson. “Coach Higgins employs handwritten maps that can be delightfully imprecise to the untrained eye,” said Gregory Johnston ’91. “Many of the rural destinations on the trips have no cell phone coverage.” Once you make it, spend an afternoon of hiking and swimming in Alabama’s Cathedral Canyon, followed by a steak cookout at camp.

Day 2:  Raft the Ocoee River in Tennessee. Just a little bit scared? Ray reminds us: “You can sit at home or trust in God.” Make camp in North Carolina for the night.

Day 3:  Hike and visit North Carolina waterfalls that include the highest drop east of the Mississippi River. Keep an eye out for unforeseen hazards at White Water Falls. “About five years ago, we bee bopped down there and behold there were 15 naked hippies on the rocks,” said Ray. “I had to go talk to them and ask them to put some clothes on so we could slide. They did. We slid, and then left. They went right back to it.”

Day 4:  Fill up on Chick-n-Minis at Chick-fil-A before tackling the challenging, yet beautiful, Class V rapids of the Chattooga River. You’re an outdoors pro by now. Then drive to Atlanta in the evening for dinner out and a relatively luxurious stay at a hotel.

Day 5:  Head back to Jackson, bursting with new friendships, stories to last a lifetime, and true life-changing experiences. 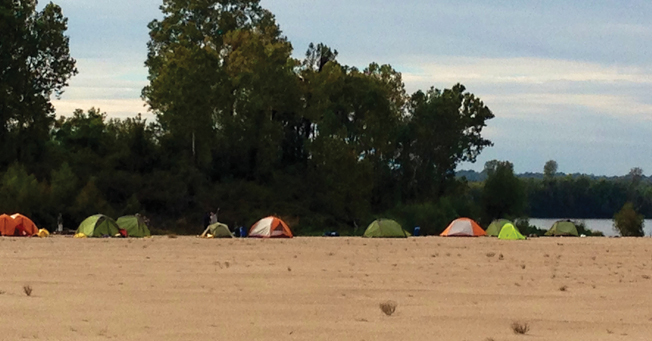 It’s clear that Ray Higgins is a veritable force of nature, not easily duplicated. Thankfully, Higgins has agreed to work as a consultant to help guide the JA team in maintaining and enhancing what’s available to students.

“There’s only one Ray Higgins,” said teacher and coach Nic Henderson. “He just thought our kids could benefit from these things so he did them. Then he had another idea. And another. Now we’re trying to turn it into a program.”

As part of the program, JA seeks to incorporate outdoors experiences with other character-building opportunities and offer signature events for grades first through twelfth. Henderson will step away from coaching and classroom duties and will take the lead, with support from other faculty and staff, in shaping this leadership program that will be a key role in our strategic plan.

“Coach Higgins’ rafting trips are legendary. I meet alumni from Jackson Academy all the time, and they always ask me if he still takes people on the same rafting trips. Coach Higgins left JA better than he found it.” ~Steven Irby, Class of 2015

Together, the trips and events will continue to  nurture student growth and spirituality. Planned opportunities include:

•  Visits to the Down Range ropes course in Clinton.

•  Lunch to Lead workshops and talks.

•  Hiking in the Blue Ridge Mountains

JA also will continue the popular “Chicks to the Chattooga” rafting trip that took its inaugural run last summer, pairing mothers and JA counselors on a mini version of the student trip.

For further reading, you can read personal reflections from faculty, parents, and alums about the importance of these JA experiences, including:

•  Deanna Funderburg on Chicks to the Chattooga