Soccer players celebrated a big win Saturday that earned the Raiders the MAIS Division 1 State Soccer Championship. The Raiders built momentum in games leading to the final match-up, beating their cross-town rival Prep and finishing No 1. in Division 1 of the MAIS. The Raiders finished the year with a record of 18-4-1, and 8-1 in conference play. 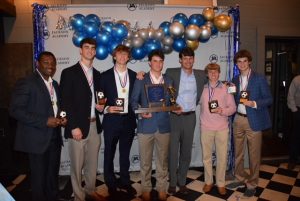 This is the soccer team’s first state championship in 10 years. Previously, the Raiders have advanced to championship games where they earned runner-up in matches that were decided in overtime and by a single goal. The Raiders now hold nine state soccer championships.