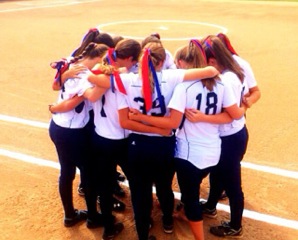 Lady Raider Softball visited Hartfield Academy in their second meeting of the 2014 season. It was a quiet, somber win for the Lady Raiders as news of the passing of Jackson Prep’s Walker Wilbanks reached players right before game time just after the players had circled up to pray for Walker.

The Lady Raiders donned Prep Patriot red and blue ribbons in their hair to honor Walker, the Wilbanks family, and the extended Prep family.

On offense, JA was removed from the batter’s box by striking out in a single instance. 7 hits, 6 RBIs and 10 runs defined the Lady Raider offensive effort which included making contact at the plate on 95% of their plate appearances. Delaney Wallace, Robyn Hadden, Kathryn Butler, Ashton Berry, Holeman (stand up double), Lily Crawford, and McKinna Powell each scored a hit a piece. Mary Lindley Tharp, Berry, Hadden and Butler each had 1 RBI, while Powell had 2 RBIs. The Lady Raiders took this contest 10-1.