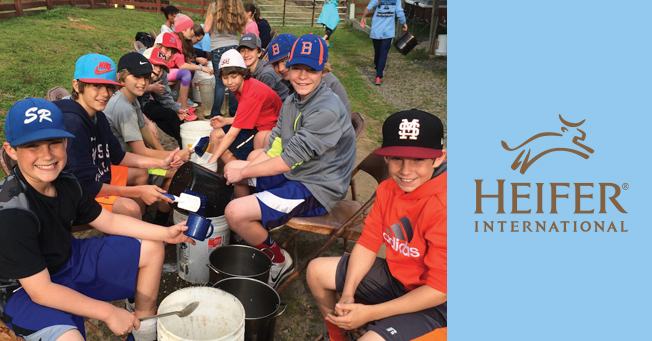 What do a rooster crowing, bartering, lack of sleep, a mouse, and joy in the midst of hardship have in common? All are part of the Heifer Village experience. In March, sixth graders spent a night in this experiential learning setting designed to increase awareness of how hunger and poverty affect people. Student Priya Ray says she will cherish the memory forever.

Heifer Village in Perryville, Ark., reenacts the challenges of living in areas of the world where Heifer International sends aid. “My friends and I learned so many things. We learned about how hard it is to live in poverty and how to survive. We also learned how to live without all our gadgets that we have today,” said Priya. “Heifer teaches us how to live with just a few resources—without cars, phones, a nice kitchen, and other technology. It teaches us to be more thankful…”

Shortly after providing orientation, Heifer Village staff randomly assigns students, faculty, and chaperones to a village in a poverty-stricken area of the world where they “live” for nearly 24 hours. Each village is given limited supplies and instructions for setting up camp, building fires, and making a meal. For example, one group of 14 was given a plastic tub filled with a pot, seven matches, a container of oil, and a paring knife. They then had to barter for wood to build a fire and acquire food by bartering, offering to work for food, or even stealing. 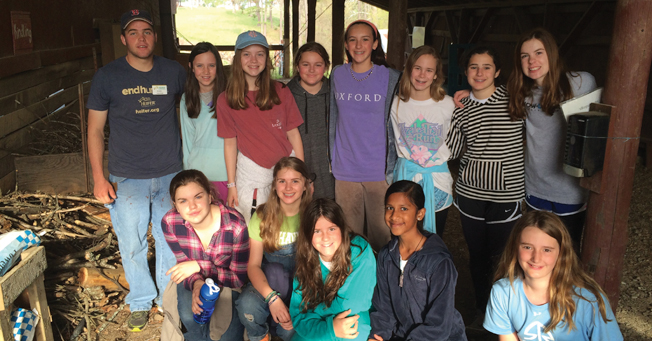 Some students are randomly assigned an “injury,” “blindness,” or “pregnancy” to illustrate how those factors can affect daily life in a village. Faculty and chaperones are assigned to be either “elderly” or a “two-year old” so that students can take the lead.

Priya said going into the trip, she did not expect it to be as hard as it was, even though teachers had shown a video in advance and had told students about it. She discovered it was actually difficult  to acquire food and protect the food from hungry neighbors. Also, she found cooking the food a challenge with limited resources.

“It was very hard to start a fire for our group (Tibet),” she explained. “We ended up having to throw away our half-cooked rice and eat the Urban Slums rice. We also had a hard time getting our food and guarding it so people wouldn’t steal it.”

A Spirit of Sharing, Despite Limited Resources

Faculty members said the lessons learned were  by far worth any discomfort experienced. They witnessed examples of empathy, finding the good in any situation, and realizing that responsibility comes with having resources.

“Watching the children deal with various problems was amazing,” said sixth grade teacher Debra Hastings. They discussed solutions until the group reached a consensus, divided duties, and went about their tasks. I saw them show compassion to others in greater need (for example, giving food to refugees). I listened as they discussed perceived injustices…”

Sixth grade teacher Shelle Pinkard found the experience gave rise to creative teamwork and collaboration, and a spirit of sharing, despite limited resources. “After many, many attempts to get a fire going to cook the potatoes and carrots, the Zambia family never succeeded. Upon hearing this, the Thailand family walked over to invite us  to bring our food and share their fire. Wow! Their fire was awesome!” she said. “After enjoying warm potatoes, carrots, onions, and eggs, the two families worked together to clean all dirty items. There were no plates, so some of the students came up with the idea of cutting apart each of the egg cartons to serve as “makeshift” plates. Their creative juices were flowing!”

“It was very hard to start a fire for our group (Tibet),” she explained. “We ended up having to throw away our half-cooked rice and eat the Urban Slums’ rice. We also had a hard time getting our food and guarding it so people wouldn’t steal it.”
~Priya Ray

‘The Best Experience I Have Ever Had as a Teacher’

Even with its moments of conflict over resources, a rooster crowing, a hungry mouse, and lack of sleep, the trip was a great learning experience. “There is a unique experience that takes place student to student and student to teacher when you get outside of a classroom. It was a time of bonding and being equal because we were all experiencing something for the first time together.  It has been the best experience I have ever had as a teacher,” said Lisa Lucas, sixth grade teacher. “My hope is this will be something that stays with them well beyond their sixth grade year and will inspire them to find ways to make a difference in the world. I challenged them to see they can do something, and it doesn’t have to be huge. Small things can have a big impact.”

Priya agrees, and now is more conscious of doing even small things to help. “I never knew it was this hard to live in poverty,” she said. “I have started to try to save energy by switching off lights when I leave any place.”

In gathering feedback after the trip, faculty member Nic Henderson recalled another student’s response, who said: “I felt like I wanted to go and tell the whole world to go because it was an experience that I will never forget, and it really impacted my life and made me want to help feed people that live like that every day.”

Teachers have made a point to reinforce the lessons so they endure, using conversations, discussion questions, projects, and a video. “In my homeroom, we talked about our favorite moments and our least favorite moments,” said Priya. “We also watched a video called Living on One Dollar, which was a great video.” Living on One Dollar describes the journey of four young friends who attempted to live for eight weeks on  $1 per day in Guatemala. 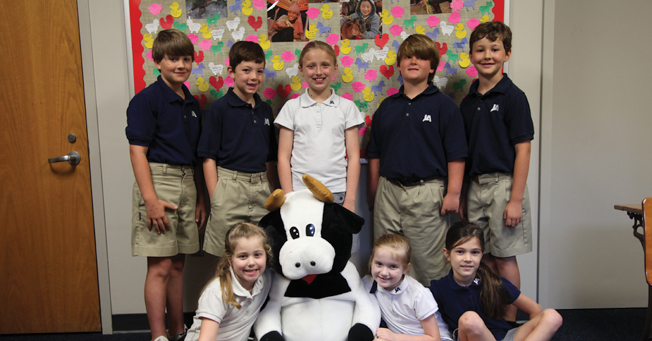 In a separate Heifer International project, students in grades one through four raised money to purchase animals to benefit families around the world. Students raised nearly $4,000 by doing chores for their family and friends, baking cookies to sell, and having lemonade stands. With these funds, the Lower School purchased four heifers, three water buffalo, two llamas, three goats, two trios of rabbits, two flocks  of ducks, three gifts of honeybees, a sheep,  a pig, a flock of chicks, and trees.

Heifer International was established 70 years ago on the “teach a man to fish” philosophy that works to end world hunger and poverty by helping families achieve self-reliance. Through donations, the organization creates a sustainable source of income and nutrition by providing a family a cow, goat, chickens, or other animal.